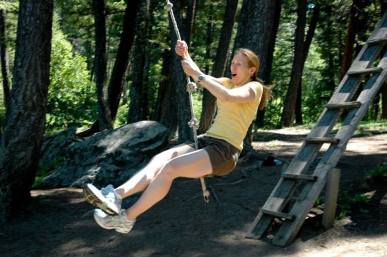 This picture says it all.

This is how I feel when I’m at the Feathered Pipe Ranch. This moment was from several years ago, during one of our July retreats with Erich Schiffmann. I say “our” because being at the ranch with Erich and all of my dear friends whom I’ve met there over the past 15 years, was always like a family reunion every summer. I’m so grateful to my friend, Robyn Gibson, for capturing this moment of something we used to love to do at the ranch: swinging on the rope swing.

This was a big, giant – I mean giant – rope swing that was attached to a cable between two huge pine trees, where you could swing out over the lake, let go, and drop into the water. Some of us realized that even if we didn’t want to drop into the water, we could swing on it anyway. It always took us a few days to work up to getting on the swing because it was so damn scary. We had to walk by it and look at it and give ourselves time to muster up our courage to get back on it. Usually, by the third or fourth day, we were ready.

Now, there’s a lot you can see in this picture up there, but there’s also a whole lot you can’t see. For starters, the length of the rope and the height of the attachment to the cable. The rope was really long and the attachment was very high up. Those big, tall, supporting pine trees would sway and flex every time someone was swinging. Secondly, I don’t know exactly how tall that ladder was behind me, but those first six rungs or so in the picture were just the bottom part! The entire ladder was very tall and had a little square plywood platform on top for standing – or, more accurately, for getting up your courage to jump off.  This is why it always took several days before we were “swing ready.” Plus, did I mention you swing right down through those huge pine trees out over the lake?

So, on the designated day at the appointed time, the swingers would gather over at the ladder. Who was going to go first this year? With a smile, you’d grab the bottom knot of the rope and hold it while make your way up those sacred ladder rungs.

Now, this was scary in itself because with each rise of a rung, there would be a little more tug from the rope. The higher you went, the bigger the tug forward. So, I’d go up a few rungs, sit there, look out over the lake and feel that ever-increasing fear with the ever-increasing tug of the rope. Then, I’d go up a few more. Wait. Feel my heart rate increasing. Then (and my palms are actually sweating right now, just thinking about it)…I’d creep up to the top platform, staying small, keeping my center of gravity low and then s l o w l y stand up. Oh my God. It’s such an exhilaratingly terrifying place to stand. I mean, I’m on a shaky board ladder, on a tiny little perch way, way up there, knees bent, leaning forward, feeling the strong pull now of the rope, beckoning me to let go and jump…and there’s the lake and everyone else way down there….

The only requirement now is to let go of the thinking. I mean, all I have to do is jump and I will naturally land on top of the little wooden seat that’s hanging down out there, several feel in front of me. It’s not a thinking activity. My body knows what to do. It’s either do it or don’t do it. It’s either jump or climb back down. I have a choice. Nobody is making me jump. I want to jump. Oh God, this is soooo high…

Then, in a huge act of self-trust, I take a breath, take a leap of faith, and jump. It’s a freefall for what seems like forever, going down and down, like a giant slide between
those two huge pines, and then a graceful swoop waaay out over the lake and way up into the Montana blue sky. The scream that comes out of me is always primal and comes from the depths of my soul. It’s awesome. The swing goes back and forth – gotta be
careful not to hit the ladder on the swing back in. And then I lay out my whole body,

letting my feet go way up into the air first, looking backward at my friends on the terra firma. (There’s Anne doing the layout.) We’re all screaming and laughing and now. The swing slows after several passes out over the lake and back and it’s easy to hop off. Well, sometimes easier than others! But wow, it’s unbelievable taking that plunge and that wonderful leap of faith.

This swinging practice we had at the ranch is a whole lot like Yoga. Living an inwardly guided life, with one ear turned toward The Infinite in all we do, calls us to let go, take a leap of faith, and sometimes jump into the unknown. But when we leap, the net will always appear, just like the little wooden seat always ended up right under me, to support me and carry me out over the lake and up into the sky. And then we soar into places we never thought possible. There is nothing more freeing.

A few years later, the pine beetles took out those two massive pine trees and the swing had to be shut down. It’s open again now, with new supports and even a new ladder. I haven’t been back on it since the old days. Maybe this year, when I get to the ranch in August, I’ll give it a try. I’ll at least walk over to it and think about it for a few days and see if my courage wells up.

I invite you to join August 18-25 at the Feathered Pipe Ranch for our week-long retreat – Be the Real You: the Art of Self-Trust. This is a sublime week celebration, laughter, community, creativity, and open-hearted authenticity. We’ll explore the themes of Freedom Yoga, the practice of inner listening, courage, and deep self-trust, and give ourselves permission to color outside the lines, release comparison, and bravely be the ones we are waiting for.

1 thought on “The Leap of Faith”