Last summer I noticed I had become way too tunnel-visioned with my yoga teaching. It was beginning to be all that I thought about –what I was going to do in my next class, when and where might my next workshop be, etc. etc. In short, I felt like I was beginning to isolate myself from interacting with people in the “real world” on a regular basis. Though I love teaching, and pondering all those questions are important, I realized I had become imbalanced. I needed to practice my yoga in some new and different ways. I mean, hey, it’s easy to be grounded and centered when you’re in a quiet house….

So, I decided to inquire about volunteering some time at St. Thomas Early Learning Center, where both of my kids went to school from age three through first grade. St. Thomas ELC is the kind of place you just want to stay at forever and never leave. It’s spontaneous, gentle, organic, and honors discovery and the power of natural inquiry. Before I knew it, instead of simply volunteering some time, I was joyfully hired as the new teaching assistant in a classroom of three-year olds, with a teacher who I knew and loved and was the assistant teacher of my own kids way back when.

Working with these three-year olds has been incredible in so many ways and they are helping me practice Yoga in totally different ways than I have been accustomed. As I said, it’s easy to be grounded and centered here at my house with nobody around. However, being in a room full of 15 three-year olds is a whole ‘nother ball game! It requires that I absolutely be grounded and present in every moment. Feedback to being ungrounded is both swift and intense!

One of the things I have to do as a teacher is attend continuing education and one of our first opportunities this year was to work with clay at a pottery studio, making plates. How fun!! And it was…until we got to the point where we had pressed the clay into the plate molds and now we had to “create art” out of it. Everyone around me was happily and methodically pressing various items into the clay to create texture and pattern and I was just stuck. I wanted what I created to be good and pretty, not ugly, and certainly not embarrassingly “non-artistic”. I stood at the table for a long time, feeling worse and worse, watching the self-judgments beginning to rise.

Suddenly, I remembered the three-year olds. In our classroom, we make art every day in many ways and our easel is always set up with paper and paint. When those little ones come to the easel, they don’t stand there, thinking about what to paint, fretting about where to start. They pick up the brush and just start painting. And they love it! They’re totally in the moment with it, not concerned with how it will take shape and, most importantly, not concerned with a final product. They are process-oriented, not product-oriented. A definition of meditation that I like is anything you do, when you’re completely immersed in the process and not concerned with the outcome. When those little ones paint, it’s a meditation. Standing at the table in front of my blank clay plate, I was certainly not in any kind of a meditative state — I was only concerned with the outcome. I asked myself, “What would a three-year old do?”

As if by magic, without a plan, without a final product in mind, only concerned with the process, I began to roll little strips of clay and lay them on the edges of the plate. Then I stamped out little shapes and put those on. People would come by and say, “Ohhhh….what are you making?” “Uh, no idea,” I would say. I just followed the rightness wherever it took me and I began to enjoy the process! I started really having fun with this. It was SO FREEING!! I titled my piece “Ode to a Three-Year Old.” Seemed perfect. 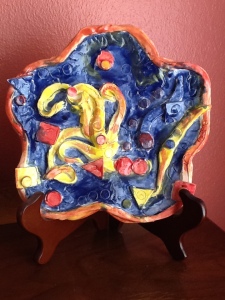 When we picked up the pieces a few weeks later after firing, everyone’s looked so amazing…and there was mine, looking …well, let’s say vastly different from everything on the table. Was it beautiful? Not by most standards, but who is to say? It’s a testament to PROCESS, following the feeling of rightness, surrendering to organic spontaneity, letting something creative be birthed through me, without planning it out ahead of time. That’s what Freedom Style Yoga is all about. And I am so grateful for the infinite wisdom of three-year olds, who remind me of the Truth.